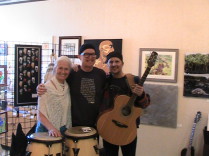 Christina and Mitch, 2/6 of the Revolution Sonics live at the Fairview Fine Arts Centre as part of the CKUA 'Touch The Transmitter Tour 2017' with David Ward,Hayley Muir and the CKUA road crew. 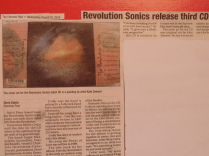 Spirit River based band the Revolution Soniics have come out with their third CD, Free the Revolution. Frontman Mitch Cedar said the title for the CD refers to the spiritual struggle each of us goes through. It starts off with a sound that might remind you of a certain Australian band, but the rest is more reminiscent of the Beatles. The artist responsible for the cover artwork on the new CD was Julie-Anne Dockree. He saw it at an art exhibit he also had art in and immediately asked for and was given permission to use it for the album. 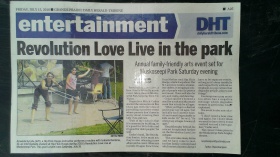 Part of my vision is that it's community building, so it's good for little kids and it's good for older people, he said. Cedar's band, The Revolution Sonics, is the main act; they're also releasing a new album at the event. Other acts include Dragon Stew Crew, Your Mother and Hip Flick Hoops, a hula hoop show. The St. Lawrence Centre, a homeless shelter, is bringing a couple of people who do poetry and music. There will also be arts and crafts, and dancing.

Revolution Love Live is back with new sights and sounds for attendees. The third annual family friendly event will take place at Muskoseepi Park Amphitheatre on Sunday from 1 to 5 p.m. This year's lineup and entertainment include . . . Cedar estimates attendance to have been roughly 100 people last year, but said it's difficult to judge the total amount of people since it takes place in such an open area. "The event is definitely growing. It's accessbile to all," said Cedar. It'll give families something to do that's free."

It starts off with a bang, there will be music and hula-hooping then more music and it alternates throughout. The Revolution Sonics finish the night off, and then, right after we do mini workshops where we'll come out and whoever wants to participate off the stage can learn juggling, hoola hooping a bit of juggling. . .

On July 14 you'll be able to feel the Love as Revolution Love Live is coming back to Grande Praire, with a fun summer feel and a new outdoor venue. It's the second time the artcentric even has happened in the Swan City. Last fall organizer Mitch Cedar introduced residents to Revolution Love Live at the Showcase Centre. The upcoming event has been moved to Muskoseepi Park Amphitheatre. "Just because we wanted to be outside. Muskie is in the middle of town, so city central again. Cedar says.

The Revolution Sonics are coming out with a new CD called Myths and Legends for local music lovers delight. The Revolution Sonics are basically a family band, based in Rycroft, consisting of Mitch and Christina Cedar, Emma Cedar, Ernst and Tasia Beithestrom, Isaac Cedar, Ocean Cedar and Angie Meksymetz. Mitch Cedar told the Post his strongest influences are traditional folk and blues, but there are more modern influences in his music as well. Cedar said, "This album is a follow-up to our inaugural CD "Celebrate" released in 2008. . .

It's not often you can check out a show which features hooping, juggling, live music and a dinosaur, but then again not every event can do what Revolution Love Live does. Lead by the group MusesNorth, the event is ready to take over the Showcase Centre at the Community Village on 102 Street on Nov. 10 with a line up that offers a wide range of talent for the whole family. . . .

"The Revolution Sonics are a passionate group with an eclectic sound. Known for their support of causes throughout the Peace Country region, including the annual 'Red Cross Rocks Concert' and the 'Ten Thousdand Villages.' They bring meaningful, thoughtful lyrics to the stage  with an abundance of enthusiasm wherever they play leaving their audiences energized and inspired!"

"I have been aware of the music of Robert  and Christina Cedar for quite some time now, in the folk music genre. The Revolution Sonics, is a new wave, a change in horizons from the folk music melodies of the Stray Crows, to a more pop music, soft rock sound. Thankfully much of the same consciousness, the same social analysis and the same prairie flavour that characterized previous albums transferred into the new lyrics and stylings of the Revolution Sonics. I eagerly look forward to the release of their first album."

" Hailing the renaissance from the ridges above the Spirit River with their unique sound echoing throughout the prairies of the peace river region is the Revolution Sonics! Creatively blending an array of cacophonous sounds, rhythms, and lively guitar riffs into an auditory ambiance that is delightful and stirring to the listener, this group of sonic revolutionaries has  much to say through their music on topics delving into spiritual awareness, social consciousness, and personal transformation. Tapping influences from a variety of genres and styles, the Revolution cannot be contained to format, with sounds ranging from folk to rock to shamanic surfer music of the psychedelic sojourn! Experience the Revolution firsthand - it's a Sonic Blast!"

All in the Family for The Revolution Sonics - From the Jackson 5 to the Kings of Leon, families have always had a place in the music industry. Enter the Revolution Sonics, a Peace Country -based band comprised of two parents and two kids as four-fifths of their group. "Its a good change to get together as a family and it kind of brings us closer together," said frontman Mitch Cedar, who lives in Rycroft, adding they don't fight like some bands, but rather have occasional 'discussions.' Cedar, who sings, plays keyboards, guitars, percussion and horn, is joined by wife Christina Cedar on vocals and percussion and sons Isaac, on lead guitar, drums and percussion, and Ernst, who plays bass. Tasia Johnson, who sings and also does percussion, rounds out the lineup.They will be performing twice in Grande Prairie this week, first as part of the Peace Starts at Home festival May 13 at Better Than Fred's, then at the Community Village courtyard May 16. The second show will also double as a CD release party for the latest disc "Celebrate." We wanted to do it at some point and now that the weather's nice - we're all about being outside, so this seemed the perfect fit," Cedar said about the CD, which actually came out in December 2008, but never saw an official release party. If the weather's nice there should be a good flow through of walking traffic. This is kind of community ground zero and that's what the Revolution Sonics are about," he said about The Community Village site. "The content of our music is basically community building, peace and how to make peace. We feel good about promoting that. It's a good cause and the name says it all. It kind of pulls the whole community together. It feels good to promote healthy living and reverence for the world in which we live." The Revolution Sonics, whose name represents "the revolution within and how music can help us to make the transformations we need to make in life," incorporate a wide variety of instruments into their sound. Everything from guitars, bass, drums, accordions, keyboards, mandolins and saxophone to assorted percussion instruments such as bongos, congas, shakers and chimes are featured. "We usually combine hand drums with the full drum kit to get a multifaceted rhythm thing going, then add guitars, bass and vocals for the full sound," Cedar said, adding their sound can easily adapt to acoustic or electric. We're kind of like folk meets roots meets rock at the world beat cafe',  he said. We are an acoustic-electro, roots-rock group exploring the landscapes of human experiences through music. We explore social and historical issues and lots of stuff in between. The Revolution Sonics will play Better Than Fred's as part of Peace Starts at Home festival May 13, followed by a CD release party at The Community Village courtyard at 2 p.m. May 16. For the latter show, people are asked to bring a donation for the food bank.